Lucifer (superior), 6 or 26 legions of lesser demons and spirits (subordinates)

Janus
Bifrons is a demon who is either an Earl or Count of Hell.

The Lesser Key of Solomon[]

The Forty-sixth Spirit is called Bifrons, or Bifrous, or Bifrovs. He is an Earl, and appeareth in the Form of a Monster; but after a while, at the Command of the Exorcist, he putteth on the shape of a Man. His Office is to make one knowing in Astrology, Geometry, and other Arts and Sciences. He teacheth the Virtues of Precious Stones and Woods. He changeth Dead Bodies, and putteth them in another place; also he lighteth seeming Candles upon the Graves of the Dead. He hath under his Command 6 Legions of Spirits.

Bifrons is seene in the similitude of a monster, when he taketh the image of a man, he maketh one woonderfull cunning in astrologie, absolutelie declaring the mansions of the planets, he dooth the like in geometrie, and other admesurements, he perfectlie understandeth the strength and vertue of hearbs, pretious stones, and woods, he changeth dead bodies from place to place, he seemeth to light candles upon the sepulchres of the dead, and hath under him six and twentie legions.

Demon who appears with the face of a monster. When it takes human form, it makes man learned in astrology, and teaches him to know the influences of the planets; he excels in geometry; he knows the virtues of herbs, precious stones and plants; he transports the corpses from one place to another. He has also been seen lighting torches at the tombs of the dead. He has twenty-six legions at his command.

Encyclopedia Of Demons In World Religions And Cultures By Theresa Bane[]

A Fallen Angel, Bifrons is the demon of death and is under the command of Mephistopheles. He has the rank of both count and earl and commands either twenty-six or sixty legions, sources vary (see COUNTS OF Hell and Earls of Hell). Appearing as a hideous demon, Bifrons is a nocturnal demon who is most powerful during the month of November. This demon is known to move bodies from one grave to another and cause corpse candles to float above graves. Bifrons, like many Fallen Angels, is also a teacher; he teaches astrology, geometry, gemology, herbology, and numerous other arts and sciences. He has dominion over the planet Jupiter. 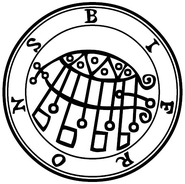